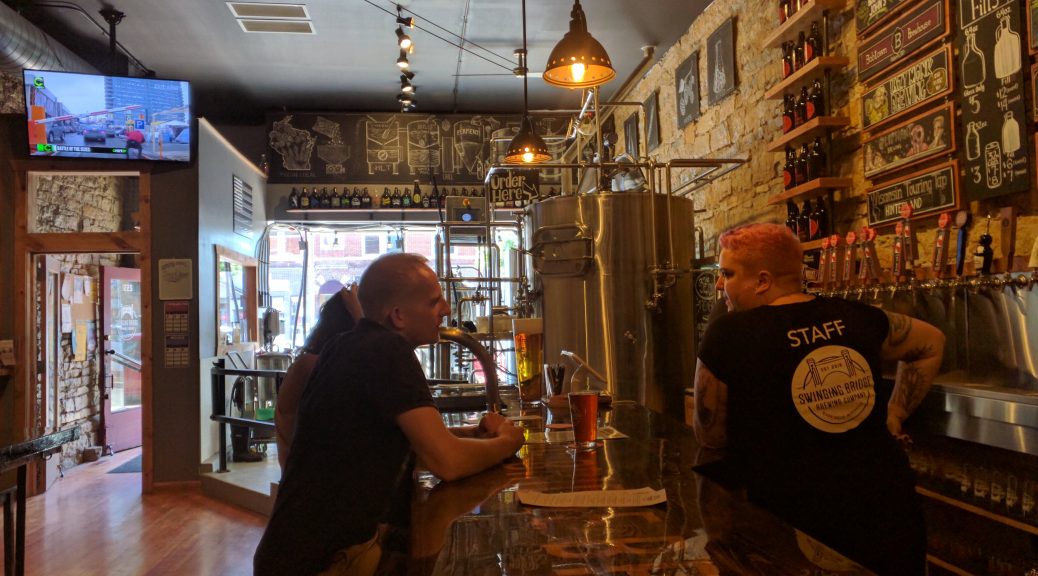 What do you do when you need some time off the road but still getting work done? Find an archive under 40 minutes away that has relevant papers!

Part of my quixotic quest to leave no stone unturned in local Midwestern politics means that sometimes you need to just dive into an archive’s materials and hope something good turns up.

My time in Menomonie at UW-Stout, just 38 miles down WI-29 from UW-River Falls, demonstrated that up through around 1980, there was a network of center-left Democrats spanning western Wisconsin, represented in Congress by Democrat Alvin Baldus until 1980, when voters dumped him for moderate Republican Steve Gunderson.

Having looked at the Baldus campaigns from his perspective, though, it’s important to get to the other side of the story–who were his constituents and the Democrats (and moderates) voting for him? How did they work with him and how did he aid them at the local level? I went to River Falls in search of those groups and answers.

A Democratic Party for whom? Pierce County records reveal that in September, the county-level party was extremely concerned with the elimination of funding for memberships that allowed low-income and senior citizens to join the party at steeply discounted rates. This, to Pepin County Chairman John Norman, was unacceptable:

“The State has indicated that it is the County’s problem for allowing ‘indigent members’ into the party, and that the County may have a special fund from which to assist lower-income persons. To me it is simple: more for the State, less for us.”[1]

State Assemblyman Harvey Dueholm, a retired farmer and former La Follette Progressive-turned-Republican-turned-Democrat (in 1954), kept the fight for those lower-income persons alive. (He also, today, names a low-income housing center in Centuria, WI, and apparently supported Fr. Groppi during his marches in Milwaukee in 1968-9.) Ahead of the legislative and gubernatorial elections in 1978, he warned that low-income voters were being bought off in western Wisconsin by an idea of trickle-down economics coupled with the idea that the Democratic Assembly and Governor were not receptive to them:

“A lot of people will be fooled by this talk of tax breaks by not realizing that tax cuts like Proposition 13 and the Dreyfus plan are benefitting mainly the wealthy. Another thing people forget is that the services we have in Wisconsin came through Democratic Governors and Legislatures. The shared tax from the state has allowed rural and low income areas like ours to have the same services and quality of life as the wealthy areas.”[2]

It seems increasingly clear that while there were politicians in this section of Wisconsin devoted to making services available to people on the margins, they were running up against funding and just plain give-a-damn from the state party apparatus.

Dueholm was the kind of politician renowned for his humor and his ability to tell it like it was, even if it was unpopular or…a little suggestive (see picture insert). After announcing that he would not seek reelection due to the recurrence of cancer in 1977, Dueholm passed away in 1980, and with the defeat of both him and Baldus, it represented the loss of two established politicians who had the clout and wherewithal to bring the Democratic Party to…

The grass-roots. Dueholm, Baldus, and the local party were all incredibly concerned with winning up and down the ticket. Remember, if you will, that in Menomonie we learned that “Baldus recognized the threat that he would face in the 1980 elections back in 1976.” The Pierce County Democratic Party was doing its best to follow that example. In June 1978, for instance, Pierce County combined its summer workshops with a Baldus campaign meeting so that the Congressman could devote his (more extensive) resources to aiding the down-ballot elections.[3]

This fulfilled members’ plans from that January, in which Secretary Mary Hanrahan “emphasized that Polk County [had in the past] developed attractive, local candidates supported by a grass-roots party organization which even distributed literature to the farmhouses.”[4] These are levels of coordination I don’t see in other regions of Wisconsin, let alone the rest of the Midwest. It might help explain both the aberrational nature of the southern 3rd District and the Driftless Area, along with the persistence of politicians like Ron Kind in that area to this day.

No lodging or really all that much sightseeing. I actually had never really spent much time in River Falls before, despite living just 35 minutes away and playing soccer against a few River Falls teams in my day. Unfortunately, I did very little to rectify that during these couple days. The campus was in the throes of prepping for student move-in, so there was a little more buzz and activity than I’ve seen over the course of the summer, but it was still a lot of wide-open quads centered between low-lying red-brick buildings. A more…unified?…design than most of the other UW satellite campuses I’ve been on, and a pretty one at that.

This is actually of a little more importance than my usual “I’m bored after the archives close in [insert Midwestern city here], let’s have a beer” approach, because good friends Lindsey and Austin recently moved to a beautiful piece of land just southeast of River Falls. So obviously I needed to make sure there were bar/brewery options for when we visit. It just makes good sense.

Swinging Bridge Brewery has been right on the main drag of downtown River Falls for about a year now. It definitely has the “hole in the wall” vibe going (see the cover photo), but the inside is beautiful, with exposed brick, brewing equipment right in the front window, and a long bar with ample seating (both bar and high-top tables) provided. Even at 3:30 in the afternoon they had a good crowd in, from locals to students to out-of-towners.

At the bartender’s recommendation (I forget her name, but she teaches art, I believe, at UWRF), I tried their 4 Winds IPA.

It was very easy on the bitterness, almost to the point of tasting more like a Midwest Pale Ale, but with really good tropical fruit flavor that wasn’t overwhelming. I would absolutely try this again sometime soon, especially given that they apparently also age it on mango habanero and blood oranges (the former more appealing to me than the latter).

Because I perpetually keep an empty growler in my car trunk (hey, you never know), I decided I would also grab some beer to go. After a quick sample, the winner for me was the Cleary’s Dry Irish Stout. It really did live up to its promise of smokiness, and it had a bitter coffee flavor to boot that I really appreciated. I’m looking forward to visiting here again–especially if they keep their Peanut Butter Porter on nitro!

Laura and I also had the immense pleasure of attending current dean of Midwestern history Jon Lauck’s talk at Common Good Bookstore on his recent work, Warm Center to Ragged Edge: The Erosion of Midwestern Literary Regionalism, 1920-1965.

In the book itself Lauck turns on its head the conception that authors like F. Scott Fitzgerald, Edgar Lee Masters, and Sherwood Anderson were participants in what Carl Van Doren famously called the “revolt from the village.” Instead, he uses both their papers and the writings of lesser-known regional figures like Iowan Ruth Suckow to demonstrate a very real sense of Midwesternism that was subordinated by Eastern literary figures, historical organizations like the Mississippi Valley Historical Association (which became the Organization of American Historians, abandoning its regional affiliation), and college campuses themselves. This came in the context of the nationalization of print media, the turn of historical thought toward the consensus school, and the rightward turn of the Cold War.

While Jon went over much of this in his talk, he also took the time to answer questions and explain why the study of the Midwest itself has eroded, both in academic publication and in courses taught on college campuses. It is a point he makes forcefully in his 2013 work The Lost Region: Toward a Revival of Midwestern History, but one which bears repeating. Correcting the dearth of state and regional history at the college level (particularly at flagship institutions in Minnesota and Wisconsin) is a crusade I believe Jon and I share, and Warm Center to Ragged Edge goes a long way toward providing the historical context for this particular development. (Special thanks to Jon for the overly-generous message accompanying his signature in my copy.)

[WARNING: QUASI-NAME-DROPPING ALERT]
It was, finally, interesting to have a beer after the talk with  Jon, Pioneer Press columnist David Montgomery, and Macalester post-doctoral fellow Rebecca Wingo. We were able to chat Midwestern history and the role of digital scholarship in the modern academy, and given that my current career trajectory has put me in both camps (though my own preference remains decidedly the former), it is refreshing to hear how local institutions like Macalester are tapping into state and regional history through grants designed to fund projects which preserve local stories.

Our conversations challenged me to consider the ways in which Midwestern history is already and can improve in being inclusive of a broader range of experience and voice. De-localization of the historical profession after the cultural turn, which Jon describes and has challenged Midwestern historians to correct, can be overcome when combined with attention to local history and digital methods. Scholars like Dr. Wingo are already doing this with neighborhood projects; I hope someday to enter those conversations on a more regular basis.

I have lost track of where I am at this point (since this, too, is being published from Atlanta). The next few blog posts should be on my weekend trip to Manitoba, another week (but a very different week) on the Iron Range, and then a broad-strokes recap of my already-eventful trip to Atlanta to explore the Jimmy Carter Papers.

Following that I’ll spend two weeks flitting around the Upper Midwest, from a few days reconnecting with the Minnesota Historical Society to a Digital Symposium at Marquette to a few days finding my bearings at the Wisconsin Historical Society, perhaps with a trip to Fargo mixed in, just to keep things spicy. Then it’s off to Boston!