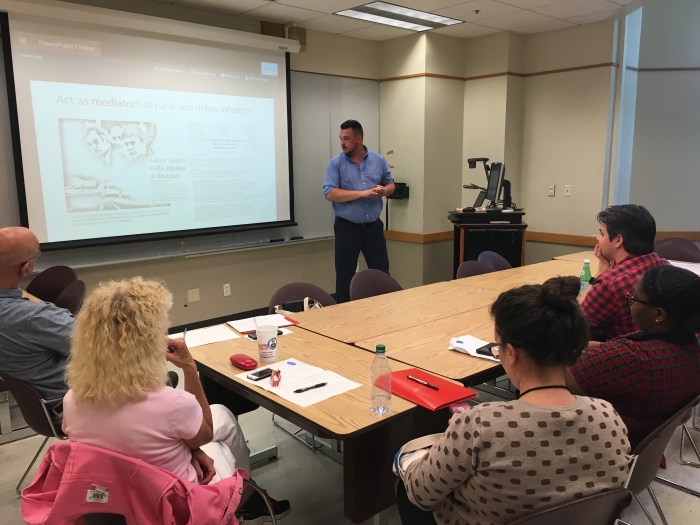 Between my trips to Saints Paul and Cloud and Iowa City, I presented or participated at three conferences relevant to various aspects of my dissertation: the Working Class Studies Association Conference (Bloomington, IN); and the back-to-back Midwestern History Association Conference and Agricultural History Society Annual Meeting (Grand Rapids, MI).

Having realized halfway in how long this post would be if I recapped all three conferences, I’ll focus first on the WCSA. I left Ames, Iowa, at about 8pm CT after my day of research and writing on the National Family Farm Coalition was done, rolling into Bloomington around 9am ET the next day and taking in the conference before heading to Black River Falls for a weekend getaway.

The drive across Iowa is not my favorite, but there’s a grace to the rolling hills of eastern Iowa before it gives way to the rage-inducing monotony of non-metro Illinois and Indiana or, worse, the drive through Chicagoland. It gave me, however, plenty of time to think about the research I’d done, the work I would be presenting, and exactly what made up the Midwest.

Where: Indiana University, Bloomington, IN
When: May 31 – June 3
Paper Title: “’From Farmhouse to Townhouse’: Bridging Rural-Urban Divides among Democratic Voters in the 1980s Midwest”

I should note, first and foremost, that I was able to attend this conference thanks to a generous $250 award from the WCSA Young Scholars and Activists Fellowship. Thank you to Dr. Michele Fazio and the entire WCSA board for this immense honor.

Joining a panel on “Organizing the Working Class in the Upper Midwest,” I had the opportunity to present my research on how Midwestern politicians like Tom Daschle, Paul Wellstone, and even Russ Feingold bridged rural-urban divides in their Senate campaigns, positioning themselves as champions of the working class. I argued that this “economic progressive populism” brought together rural, suburban, and urban interests alike in a successful coalition while downplayed social issues in favor of working-class solidarities. A brief feature from each politician:

Because one of the three papers on our panel dropped unexpectedly, it was just me and Mara Fridell, a professor of sociology at the University of Manitoba. After learning that she was from Red Wing, MN (just an hour and a half down the Mississippi from Inver Grove Heights), I was even more stunned when I learned that we were born at the same hospital (albeit a few years apart)! Her paper titled “Working Class Solidarity: Immigration to the Midwest, Internationalism, and the Red-Green Politics of Midwestern Foresters in the Early 20th Century.” Exploring the ecosocialism of the Iron Range labor unions, especially in forestry, Dr. Fridell made a convincing case for the internationalism–rather than the insularity or nativism–of rural Minnesota, where labor solidarity syncretized Native traditions with socialist principles and ethnic identities. It was a fascinating paper and one which forces me to consider how I historicize the Iron Range into the 1970s.

Moreover, a question from the audience prompted me to continue to think about where race entered the conversation in places like Minnesota and Wisconsin. Were African-Americans part of the “working class,” or did they effectively constitute an “underclass” in society, taken for granted by politicians? My research into Vel Phillips’ papers at the University of Wisconsin-Milwaukee implies that African-Americans in Milwaukee voted Democrat reliably but not overwhelmingly, rarely inspired to participate in state politics. That thesis needs a lot of work, though.

My favorite part of the conference, though, was Brown sociologist Josh Pacewicz’s keynote address on “Trumpism before Trump: Rust Belt Populism during the 2008 and 2012 Elections.” Dr. Pacewicz highlighted the decline of political institutions like labor unions and city government in two cities in Iowa, arguing that the decentralization of political authority (and, indeed, groups’ desire to be “outside” politics) laid the groundwork for the conditions which made Iowa ripe for Trumpian populism. A couple rambling questions from the audience aside, it was an incredibly insightful and thought-provoking argument which I hope to better historicize in my research on the Midwest.

The big brewery to check out in Bloomington is Upland, just on the north end of town. While I wasn’t able to make it there, I had their wheat ale, which was a fine if unspectacular wheat that wanted for some citrus or something to add a little taste. I also managed to track down their Ship Hop Hooray kolsch, which was light and drinkable; definitely top 10 kolsch beers I’ve had. Best of all, though, the wheat ale came in one of these cool mason jars featuring the old buffalo mascot for the Hoosiers:

There was also a jersey with a patch commemorating Indiana’s appearance in the 1993 Poulan/WeedEater Independence Bowl (they lost 45-20 to Virginia Tech), which I took a picture of just because it’s Indiana in a bowl game:

While waiting for my hotel check-in time, though, I did walk downstairs to Function Brewing, right in the heart of downtown. Their math-themed offerings paired with a gourmet-looking menu which had people coming in right when they opened at 3pm, and I settled on a flight: their Row Red Rye ale, Kite Farmhouse Ale, Reflection American IPA, and Theorem Milk Stout. While the Reflection didn’t do a ton for me (I don’t know the last time I’ve had a truly good IPA), the other three had unique flavors which I really enjoyed. The Row had notes of orange peel, which added a citrus flavor to the maltiness of the red, the Kite had the nice spiciness emblematic of a complex farmhouse, and the Theorem was just a quality sweet offering. Give them a look when you’re in town!

My last stop was The Tap, a beer bar and brewpub in downtown Bloomington. Their Bluebeard Berliner Weisse tasted every bit the sour blueberry it was supposed to, but best of all, for me, was their Witch Finger black IPA. I love a nice blend of malt and hops, and it obliged.

After a brief trip to Black River Falls for a weekend celebrating my friend Kyle’s impending wedding, I’m off to Iowa City for a four-day research trip to look in-depth into the papers of Roxanne Conlin.