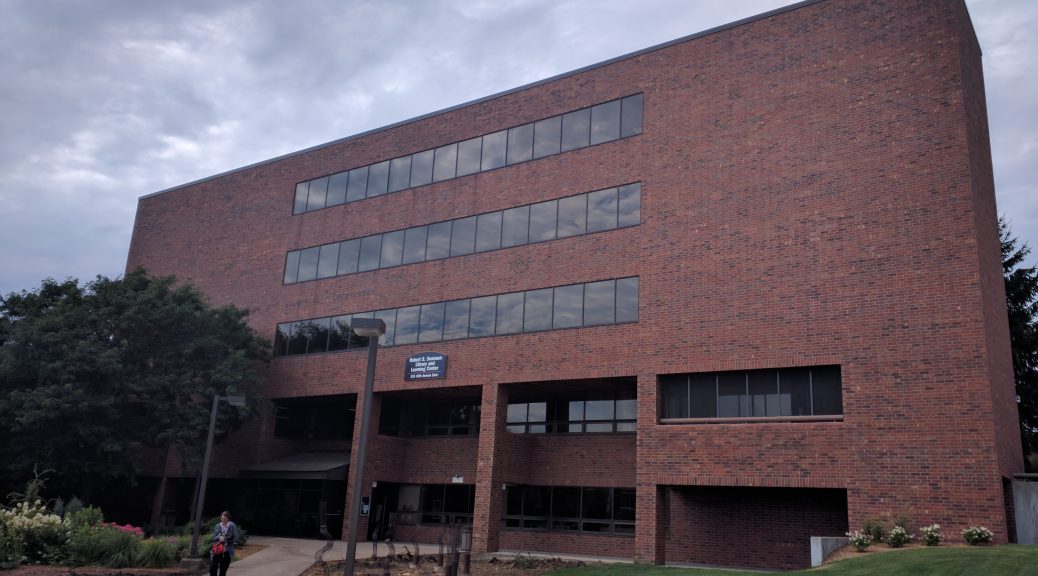 It’s practically guaranteed to be a good trip to the archives when the archivist greets you with “Oh, I actually knew Al! I sat with him just a couple of months before he passed.”

Such was my greeting from the wonderful and friendly Robin Sweeny, who was giving me tips on my research into Wisconsin congressman Alvin Baldus (D-WI, 3rd District) at the University of Wisconsin-Stout.

Baldus was one of the old guard of Midwestern Democrats wiped out in the Reagan landslide, losing to Republican Steve Gunderson by a 51-49 margin in 1980. (Gunderson was later outed as gay on the floor of Congress in 1994; more on him later.) It was, by all accounts, a pretty stunning loss for a politician described as the consummate citizen and campaigner, and so I wanted to see what the loss looked like within the Baldus camp: Did they see it coming at all? Did Gunderson campaign in a particular way? Did he Democratic Party of Wisconsin have a certain kind of relationship to Baldus?

A moderate, defined. Defeating THOMSEN, the incumbent Republican in the Watergate landslides of 1974, Baldus was a self-described “moderate” who stood for good deals for both the farmer and laborer, but spoke often of the need for a balanced budget and had a touch of the social conservatism we often associate with rural areas. And there was a reason for this! Wisconsin’s 3rd congressional districtwas, as Baldus described it, one of the “eleven rural districts” left in the House of Representatives.

[I have no idea if that’s true or what metric he used, especially with La Crosse and Eau Claire in the district, but we’ll suspend disbelief, as it clearly mattered to Baldus and his constituents.]

This got him on the House Agricultural Committee and led him to, with Hubert H. Humphrey, write and sponsor a bill which would have guaranteed milk prices be fixed at no lower than 85% of parity (the cost of production, to be brief). It also earned him he endorsement of a pro-life advocacy group in 1980, but like so many other Midwestern Democrats that year and in 1978, attack ad flyering painted him as pro-abortion–apparently his widow still holds this as the reason for his loss (per Robin).[1]

Baldus foresaw his defeat. OK, not entirely, but Baldus recognized the threat that he would face in the 1980 elections back in 1976, when he tried to maximize his funding and margin of victory to insulate himself against what he believed would be a conservative deluge in the presidential election. Writing to then-Democratic Party of Wisconsin Chair Herb Kohl (who won a Senate seat in 1988) on August 25, 1976, Baldus argued that “if [Republican opponent Adolph] Gundersen is defeated by a narrow margin, he may decide to wage a campaign of attrition — building name recognition and support for two-four years — until he finally wins in this very Republican District [sic].”[2] He was begging Kohl and then-Gov. Patrick Lucey (in a similar letter) to host a fundraiser in Milwaukee with Jimmy Carter and to siphon up to $15,000 to his campaign.

Region continues to matter in Wisconsin. When he pleaded with Madison- and Milwaukee-based politicians for money and campaign support, Baldus noted that he was in both a rural area but also one with a politically-independent streak. Refer to the map above: with so many different cities in the region, from Eau Claire to Tomah to La Crosse, along with some proximity to the suburbanizing Twin Cities and more liberal river and college towns, Baldus understood the importance and pitfalls of being all things to all groups in the Democratic Party. Being too labor-friendly cost him in 1980, but his inroads with the farming interests of western Wisconsin call to mind the successes of Ron Kind today (and maybe, just maybe why Eau Claire legislator Dana Wachs is considered a strong gubernatorial candidate in 2018) It’s a different kind of Democrat in western Wisconsin.

Did you say “he lost to a gay Republican?!” I did! But it’s important to remember that Gunderson hadn’t yet been outed. With a raft of anti-Democrat sentiment in 1980, Gunderson and Republicans could cast Baldus as part of the Carter Administration, inefficient in Washington and tied to organized labor–out of touch with Wisconsin values. Was this true? No, in a word. But campaigns are what they are, and Baldus exited public life for eight years until he returned to run for State Assembly in 1988, serving from 1989 to 1997.

A Word on Archives and Teaching

While I loved diving into the Baldus papers, the most instructive part of this trip might have been my conversations with Robin and Heather Stecklein, the UW-Stout University Archivist. Heather described the ways in which the archives are used different at Stout, which as “Wisconsin’s Polytechnic University” is training teachers, architects, designers, conservationists, engineers, and a whole lot more, but not necessarily historians or other humanities researchers. It’s less political history, like I was there for, and more history, applied.

Various classes use the archives to show historical approaches to their craft: old fonts used in turn-of-the-century literature and advertisements, which they can reproduce digitally; pieces of art or furniture, which they can scan, 3D-print, and reconstruct; trends in fashion and design from Good Housekeeping or Stout publications, of which they can trace the evolution. It was fascinating conversation that I look forward to hearing about in the future–Heather mentioned that she was working on a publication about her work at Stout, and I hope to read it soon! I’d love to apply those methods to the classroom.

I’m excited, too, by my conversation with Robin, who is still personally acquainted with Al’s widow, Lolly Baldus. Robin, Heather, and I hope to use Stout’s digital tools to produce an oral history or some other interview with Lolly about politics in the Chippewa Valley–perhaps the start of an oral history project or a chance to use my digital history training.

I’m at the point in the summer where money inevitably is a little tighter. Normally this would mean camping, but in this case I happen to know a couple people just down I-94 in Eau Claire. That meant I got to stay with my old friends Lindsey and Austin Neu and visit a couple old haunts in Eau Claire from when my fiance Laura attended undergrad there.

There wasn’t a lot of time for this, as I was really only around Menomonie for about half an hour after research each day. As such, I’ve only got two things for you.

Lake Menomin. A reservoir created by a dam on the Red Cedar River, Lake Menomin forms the northern edge of the downtown central business district and provides a nice photo-op. While I’ve been told it can smell pretty bad when the algae blooms in the summer, for now it looked awfully refreshing on a hot day.

Lucette Brewing Company was my second sightseeing stop, as I’ve had their beer in the Twin Cities but never swung through Menomonie to check them out. They’ve got a beautiful taproom and restaurant attached to the brewery, where they have started serving gourmet pizza and other bar snacks. I’d love to come back here sometime and sit down–because I was hitting the road and driving to Milwaukee, I didn’t have the chance to stay and sample on Friday afternoon, but I did pick up a six-pack of Farmer’s Daughter, a blonde ale with some nice citrus and pepper flavors. Great summer beer. (I’ll also recommend their Slow Hand Stout, which is a delicious, chocolatey offering.)

I did also manage, with Lindsey and Austin, to sample one other local beer, the Eau Claire-based Brewing Projekt‘s Stolen Mile golden ale, which hit me in the face with lemon and what I’m pretty sure was basil. I would absolutely have it again…I’ll just have to hurry, because Lindsey and Austin move soon and I lose my Eau Claire connection!

I’m posting this from Milwaukee, where I’m spending a week cleaning out my old apartment on Marquette’s campus (good riddance) and doing research in the Tommy Thompson papers at Marquette’s archive, where I used to work!