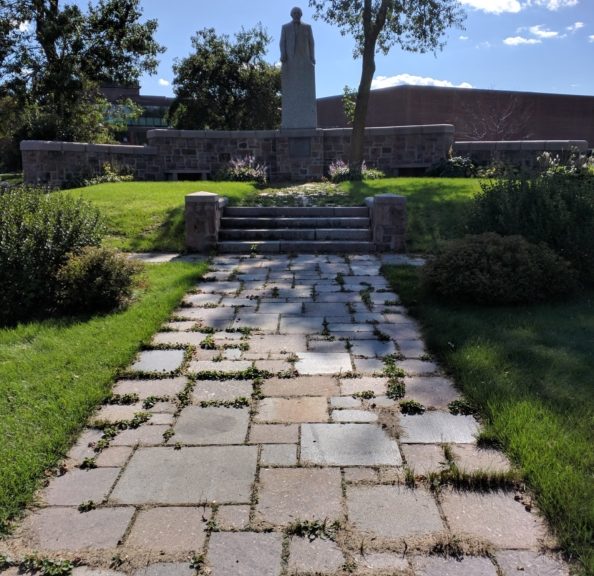 Well, we’re not going anywhere for a while. And with classes cancelled or moved online, many of us are looking for ways to engage our history students beyond traditional online discussions and textbook-reading.

This all stemmed, for what it’s worth, from seeing this tweet:

And that got me thinking–that’s exactly what my students do for their final history project in my introductory history course, HIST 141, at Saint Cloud State University.

This project stemmed from struggles in a couple other teaching roles with the traditional “semester’s-end research paper” which would incorporate 4-5 primary sources and a secondary source. I struggled to impart where these sources magically came from, to get students to engage with archives in any strong way, and to connect with a secondary source beyond using it to tell the story they could not extract from the primary sources.

Instead, I looked to a couple in-class discussions and activities I used (chief among them exploring the Carlisle Indian School Digital Resource Center and Living New Deal Project) which spurred better discussion and engagement, then sought to expand them into lengthier writing projects.

The general idea here is that students contribute to a crowd-sourced history project by engaging with primary sources in one of two ways: (1) reading and transcribing documents, or (2) doing the sleuthing to document New Deal projects in their hometowns’ or the university’s midst. They add secondary sources–with “consultation” in the form of a research proposal submitted to me–to contextualize primary sources they’ve read.

Originally just for the National Archives’ Citizen-Archivist Missions, this semester I am expanding the project to include the Newberry Transcribe project.

The conceit here is pretty simple: Students register for an account (in an easily recognizable form like “[last name]-scsu” so I can identify them) and familiarize themselves with the rules of transcribing, then put that knowledge aside for a while. Exploring the “Missions” on the National Archives or the various documents on Newberry Transcribe, I encourage them to find a document that meets a few requirements:

Most of my students opted for the Franklin Delano Roosevelt Master Speech Files. This wasn’t, as I had so hoped, because students really loved FDR and the New Deal.

His speeches were just type-written. But that was OK! Because students would still have to transcribe a full speech or relevant passage and defend it, and they were reading speeches of FDR. Felt like a win to me!

Then, using the SCSU Library and JSTOR, students located a secondary source–an article- or chapter-length work. This incorporates in-class consultation with library instructional staff, where students explore library resources and familiarize themselves with repositories like article databases and JSTOR. (At a time where universities are slashing budgets and cutting library resources, this is a great way to keep them in business!)

Students, with a couple weeks’ lead time, submitted a “Research Proposal” to me detailing (1) the transcription they plan to do, and (2) a secondary source which they thought could explain the project by adding context.

More often than not, my feedback on the secondary source was to help them drill down and find a more specific article–not just the first biography on FDR they saw, but a more specific article detailing a facet of his presidency. For one student transcribing an FDR speech on Nazi Germany prior to Pearl Harbor, we tracked down a 1987 Frank Freidel article specifically on “FDR vs. Hitler” which that student used to great effect.

From there, with my feedback (and usually a frantic email or, occasionally, in-person consultation or two), students would transcribe the document in the National Archives platform, then fill out a proprietary “National Archives Transcription Form” (just an editable Word document) which serves as their final product. Following a description of their primary source–its main arguments, any language or rhetoric it deployed to make its point, and the context in which it was made–students wrote a 750-word response where students assessed their document’s significance, what the secondary source said about its context, and a personal reflection about the research and transcription process. (I’m happy to provide the full assignment–haalac at gmail dot com!–upon request.)

In addition to the FDR foreign policy transcription, there were three other outcomes last semester that have stuck with me. One student traced an FDR speech on Labor Day, pitting it against a Michael Kazin and Steven Ross article on “The Dilemma” of Labor Day and made inferences about labor-liberalism I’d expect from an upper-level undergraduate. Another transcribed suggested educational programming for Smokey the Bear (see her work on the document here!) and situated it within Cold War rhetoric and Americanism.

One last project to highlight, because it not only demonstrates how this project allows students to help create text-searchable archival sources but also add finding of their own. This student traced the American Wild West Show, exploring a number of contracts between an Earl Gandy, the Commissioner of Indian Affairs, and Pine Ridge Natives who left the show and hired a Belgian lawyer to defend them from having to perform. She weighed this against Lester Moses’ 1996 book Wild West Shows and the Image of American Indians, 1883-1933, even going into his endnotes to find that one of her letters had been used in his work, but others had not, and used those letters to make the argument that Natives had exercised even more agency (my word, not hers) than they had been given credit for.

I’m excited to expand this project to the Newberry Archives this spring — especially with the Family Life in the Midwest letters and diaries. But whichever crowdsourced project you use (I include “Choose Your Own Adventure” options for The American Soldier, Mapping the Fourth of July, the Smithsonian, Supreme Court Behind the Scenes, and Worlds of Wonder), you’re giving students hands-on experience in primary sources, teaching secondary contextualization, and occasionally getting some real historical analysis, too!

If you have other transcription suggestions, too, leave them in the comments!

But when I got to St. Cloud, whose New Deal projects local historian and former SCSU professor Bill Morgan has detailed extensively, there were zero New Deal sites on the entire map! That’s a problem, given that 75% of my students in any given class hail from a 20-mile radius.

My solution? Get students to submit the sites themselves.

Using my Newspapers.com account to search the St. Cloud Times and University resources–including an in-person consultation and trip to the St. Cloud State University Archives and Special Collections–students locate New Deal agency sites in the greater Saint Cloud area (or their hometowns, including one student studying a ballpark in Waseca and another looking at a municipal field in Elk River).

For secondary sources, I put Morgan’s Earth, Wood, and Stone: Central Minnesota Landmarks, volumes I and II, on Course Reserves. Students doing research in other locations are encouraged to use university resources to track down WPA histories of Minnesota, county histories of, for example, Morrison and Wright counties, and other research consultations with library staff and University Archivist Tom Steman to track down other resources. While this aspect might take more adapting for remote learning, the primary-source side of the Living New Deal project is more important to me, and students have really responded.

Students follow a similar submission format as the National Archives project. After writing a brief 250-word narrative of the site, students fill out a “Living New Deal Submission Form” shamelessly ripped from the LND submission form, allowing me to edit their work before they submit it for publication (and extra credit). This includes, just like the National Archives, a 750-word response where students assess their site’s significance, its context to them and their hometown, pictures of the site that they took themselves if possible, and a personal reflection about the research process. (Again, I’m happy to provide the full assignment–haalac at gmail dot com!–upon request.)

I’ve corresponded a little bit with the Living New Deal staff, and we’ve produced a couple examples! Following my own example for the class of the James J. Hill statue base outside the old Tech High School, students have submitted sites at Charles Lindbergh State Park and of the First Avenue Wall on the SCSU campus. (Those last two are real, published student projects, which I think is pretty awesome.)

That’s an incredibly long description of two projects I’ve planned to adapt for remote instruction, but ones that are easily translatable back to in-person instruction when we reach a new normal. They encourage students to pick topics relevant both to their own experiences and to their hometowns, explore primary sources and communicate their contents, use secondary source repositories, and put together a publishable work of history.

On the way, as well, they help some of the other historical projects and fields–local and regional archives like the Newberry, on-campus staff in libraries and archives, and in one student’s case the Morrison County Historical Society Archives–who are in search of contributions and engagement in this time of social distancing.

If you’ve got any questions or comments, let me know! I’m happy to expand on these projects or other crowdsourced activities I participate in, too. Thanks to the Newberry, National Archives, and Living New Deal project for continuing these vital initiatives, and thanks to you for reading!