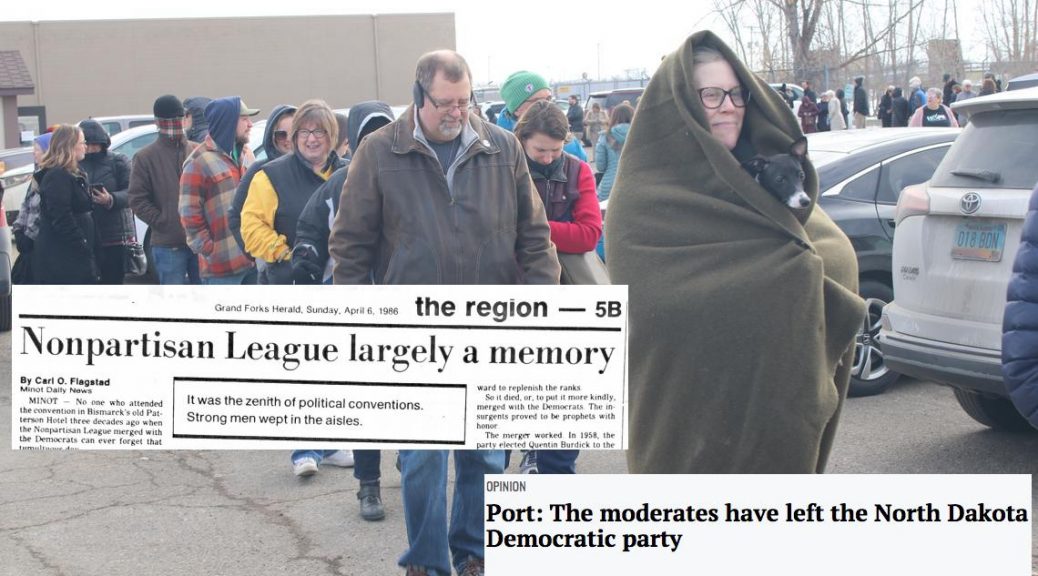 Amid the struggles–or indifference–to understand how conservative North Dakota could go for Bernie Sanders, a little history lesson explains why you shouldn’t be surprised, nor should you bemoan the death of the Democratic-Nonpartisan League.

Joe Biden won a smashing victory last night in the 2020 Democratic presidential primaries, besting progressive Bernie Sanders in Idaho, Mississippi, Missouri, and the crown jewel of the evening, Michigan, while trailing Sanders by just a couple thousand votes in Washington with two-thirds of the vote in.

There was, to the surprise of some, another Democratic presidential event yesterday: Bernie Sanders won North Dakota and 8 of its 14 delegates with a convincing 53.3-39.8 victory.

Your reaction is likely ranging somewhere between “I don’t care!” and “North Dakota had a primary?”, which is borderline understandable, given that the delegates awarded were small potatoes in comparison with the dozens doled out in Michigan and Missouri.

But there are a few misconceptions about the North Dakota result that we ought to address — not least of all because the results help us understand the character of liberalism in the Upper Midwest and what these results do (and do not) mean.

If you start things by talking about “North Dakota Democrats” or blaming the DNC for those pictures of long lines to vote which circulate Twitter, take a step back and learn something about the state’s Democratic politics first.

Part of that heritage has been a record of supporting political participation at all levels: see Heidi Heitkamp’s opposition to the ID laws which stunted Native participation in 2018 (and have since been neutralized by a February 2020 ruling) or former Agriculture Commissioner Sarah Vogel’s 1995 speech to the North Dakota Indian Voter Education Forum in Bismarck (you’ll have to go to Bismarck to read that one).[1]

District caucuses and an active grassroots cultivation program in the D-NPL have, in the past, reinforced this. Decreased voter identification with the D-NPL has hurt turnout, and in 2016 the numbers slumped to 3,300 voters at the North Dakota caucuses, even as the state does not have state voter registration or require party affiliation to participate in the caucuses.

In response, the D-NPL turned to a “firehouse caucus,” which blends the caucus style of “go to a location that’s set by the party, not the state” (party chair Kylie Oversen has expressed preference for a primary, but that has to be set by the state legislature) and the primary style of “cast a ballot and leave”.

It became, in fact, a way of preserving the D-NPL’s localized, caucus tradition (from the NPL era!) while expanding voter participation.

What could be more D-NPL than that?

In 2020 over 14,000 voters came to the polls in North Dakota. Nearly as many voters requested a mail-in ballot as participated in the entire caucus process in 2016. Party officials and observers alike agreed it was a coup for the D-NPL:

AP results team just told us @nddemnpl had the shortest caucus tabulation of the year. BTW, we QUADRUPLED turnout from 2016. #BigTuesday #TiredWednesday

Now, there are surely kinks to be worked out–more polling stations in Fargo, for one–but for outsiders enraged by what has been called anything from incompetence to malicious voter suppression: take a deep breath, learn about the D-NPL and its procedures, and reconsider what was an historic Tuesday for the party.

Point #3: “Moderates” haven’t left the party — the D-NPL has been doing this for decades.

The last (and most frustrating–here I thought Twitter warriors crying “voter suppression!” was going to be it) point for me was today’s typically-scathing remarks by Rob Port on the Fargo Forum‘s widely-read Say Anything Blog. If you would care to give it your click (and I can assure you it’s got me beat by tens, if not hundreds of thousands of clicks, lest someone accuse me of jealousy), here you go.

The headline, though, sets the tone for an uneven characterization of North Dakota politics. And, of course, it’s “The moderates have left the North Dakota Democratic party”.

Because of course they have! Any time someone vaguely left-of-center wins anything, the first thing media members and political observers (of course, one who in this case referred to Oversen in 2015 as “still of an age where, thanks to Obamacare, she can still be covered under mommy and daddy’s health insurance policy”) must do is straighten their bow ties and rush to the barricades to defend Arthur Schlesinger’s noble–and vital!–center.[2]

Instead, shall we look at the last 40 years of North Dakota caucus results?

After the D-NPL gave its votes to Ted Kennedy in 1980, the party went down to an historic number of defeats in the statewide elections, as Gov. Art Link and a bevy of the numerous statewide-elected constitutional officials went down to defeats.

You’ll remember, of course, when, that same fall, North Dakotans went to the polls and approved a 6.5% oil extraction tax initated measure and the movement of 15% of the state’s coal severance tax into an administrated permanent trust fund. So I don’t think the choice to give some votes to Teddy Kennedy ruined the D-NPL that fall–under U.S. Rep. Byron Dorgan (who also won election that fall!), Tax Commissioner Kent Conrad (him too!), and D-NPL party chair George Gaukler and executive director Jim Fuglie (after 1981), the D-NPL began a decade of domination in state politics which routed most of the Republican officeholders in 1984, consolidated the state’s Senate seats and at-large House seat with Conrad’s upset of incumbent Mark Andrews in 1986, and elected two women (Heitkamp and Vogel) to statewide office as they waved the Nonpartisan League banner as hard as they could.

You’ll have to trust me and wait ’til the dissertation comes out on that one. Or head to Bismarck and learn something. Your choice.

It’s tough to take Port’s rambling that “this base, and thus the party, is standing out in far left field when North Dakotans much prefer the center” as anything other than another broadside on the D-NPL when, as he notes, all the state’s former officeholders–Dorgan, Conrad, Heitkamp, and former U.S. Rep. Earl Pomeroy–endorsed Biden. How, then, is the party “standing out in far left field”?

In the wake of the 1980 Kennedy victory–and Link defeat–the D-NPL revamped its party structure, took advantage of voter enthusiasm (along with a bevy of its old insurgents, including Buckshot Hoffner and George Sinner, running for and winning control of the State House in 1982) to build a broad electoral coalition which did not sell out progressive (or “liberal”, if you want to be Rush Limbaugh today) value. The new D-NPL instead constructed what I call the “progressive center” in its politics, creating a coalition of women’s and LGBT interests (particularly in but not limited to the fights for the Women’s Health Organization clinic in Fargo and Mayor Jon Lindgren’s defense of a Gay Rights Week) and farm activists during the Farm Crisis, blended together by the “prairie populism” of Conrad and Dorgan.

Who’s to say Oversen and the D-NPL aren’t capable of something similar in 2020 or, perhaps more realistically, 2022 and beyond?

At the very least, conflating the base and the party is silly, and the Sanders victory is hardly something new in North Dakota caucuses. The party of prairie populism has been doing this for decades; hell, its NPL wing was founded by an honest-to-goodness Socialist (A.C. Townley). Why wouldn’t the voters from a party carrying on Townley’s heritage give their support to a democratic socialist?

Now, of course, this is no guarantee that the D-NPL will make its comeback today, tomorrow, or even a couple years in the future. But to act as if the D-NPL firehouse caucus results are new, surprising, or out-of-character is borderline willful ignorance of the state’s political heritage. And, lest you claim “the NPL is dead”–at least do something original! Take it from Minot Daily News columnist Carl Flagstad all the way back in 1986:

“The dragons it had fought and the causes it espoused had been conquered. The big-hatted men who started it were fading away like old soldiers. Few recruits stepped forward to replenish the ranks… While lip service always is paid the League, and the great days of its past are evoked at all Democratic-NPL conventions such as the one in Minot this weekend, there really is no League… It is simply three initials at the end of the party’s official name.”

What mattered was how the coalition is built. Conrad, Dorgan, Vogel, and Heitkamp understood that and–with, as you’ll learn when you read the [to-be-defended on March 31!] dissertation or manuscript, the help of a robust and aberrationally modern party structure!–fashioned a simultaneously progressive and centrist voting base. Prairie populism was the vehicle.

In the meantime, slap a big ol’ “CITATION NEEDED” on Port’s claim, and learn more about North Dakota history, everyone.