Because – and believe me, only because – I study the Midwest for fun and (hopefully) profit/employment, I wanted to note its role in last night’s historic election.

First, I think it’s important to note that I do not want this election to change how I write my dissertation. While I know that’s virtually impossible on the micro-level, I remain confident in my preliminary findings that a new, distinctly Midwestern flavor of liberalism emerged between 1978 and 1992. Russ Feingold’s defeat by Ron Johnson, Wisconsin’s flip to red for the first time since 1984, and even the jarringly close results in Minnesota do little to change the fact that a regional brand of progressive populism drove Midwestern Democrats like Tom Daschle, Tom Harkin, Paul Wellstone, and yes, Russ Feingold into the Senate.

Instead, I just want to share a couple things I find really, really interesting from this election and maaaaybe hint at why the period from 1992-2016 will be a fun one for historians of Clintonism to look back on and flesh out.

First, I’m sharing a county-by-county map from the Midwest, taken off a screengrab from The Guardian‘s electoral map because I’m not good at finding embeddable things like that unless I make them. Most stunning to me is the shift in rural counties across northern Wisconsin, west-central Minnesota, basically all of Iowa, and HOLY HELL WHAT HAPPENED TO MICHIGAN AND OHIO. All the red is jarring, yes? Now let’s look at the Wikipedia map for the 1992 election (which, mind you, is shaded differently but just let that go): 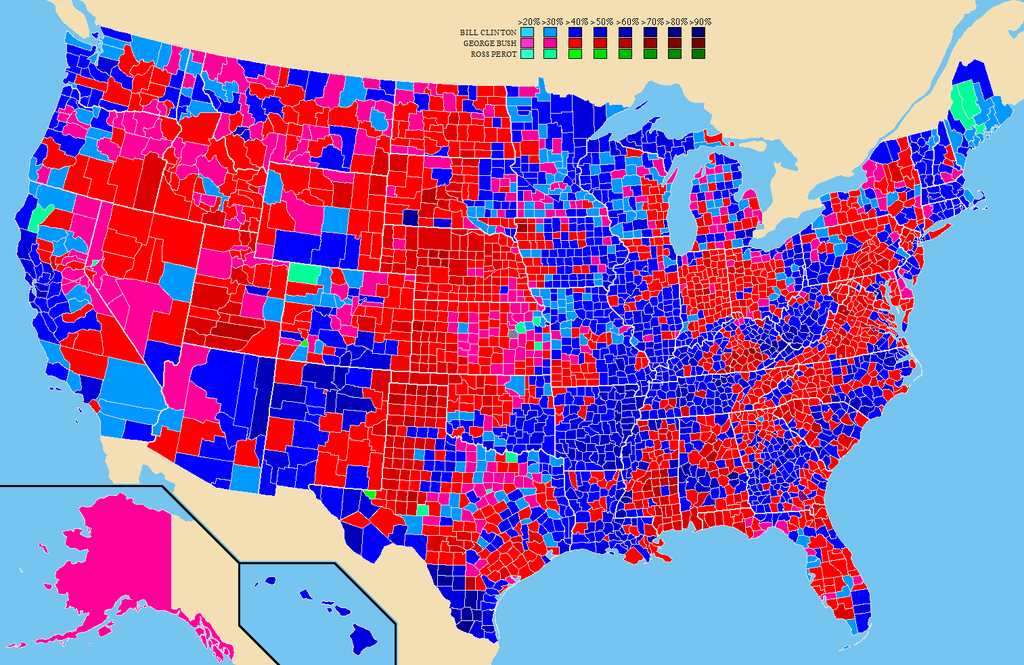 The rural vote has swung and swung hard, it would appear.

Depressed voter turnout, especially in Wisconsin and Ohio, really hurt Democrats’ chances at the Rust Belt. My friend Naveed shared this map on Facebook, and I’m struck by the pockets of red in Ohio, Iowa, and Wisconsin.

Zooming in on Minnesota in that map, as well, I’m very, very struck by the rural turnout in outstate Minnesota and the (it appears) voter apathy in Ramsey County, home to Saint Paul. I’d be curious to see the returns by precinct or neighborhood, because while I have my guesses as to which neighborhoods didn’t turn out like they did in 2012, that seems irresponsible.

It’s doubly interesting to me for as much as we talk about conservative suburbs, half the Metro area stayed in the Democratic fold.* Is this suburban centrism? Suburban education?

The New York Times, moreover, reflects an incredibly large right turn in the Lower Midwest (this is a screengrab from that article): So there’s a clear gain in rural America since 2012, but especially, at least to me, in lower Iowa, basically all of Indiana and Ohio, and lots of Michigan, with entrenched conservatives turning out in greater numbers to vote across the rural Midwest. Interesting, no? As we’ll hash and rehash this election in the coming months, looking at the get-out-the-vote effort and voters’ responses in the election will be illuminating.

For reference, here’s the All-Important (and I can’t wait to watch my Chrome extension change it to “Pesky Whipper-Snapper”) Millennial Vote:

Similar to Brexit, here’s the millennial vote. Gives a bit of hope for the future. pic.twitter.com/gSn81DOydB

So if you’re a Democrat and there’s an “It’ll get better” bone still in your body right now…I guess take heart in younger voters trending blue? The pesky whipper-snapper vote does reflect, though, that if we’re using tendency to vote Democrat as a marker of the Upper Midwest, we might’ve finally divorced the Dakotas and Nebraska from Minnesota, Iowa, and Wisconsin.** Time will tell, and historians are bad at future projections, so I’ll just add that once I have the chance to sit down and really consider down-ballot votes (especially the Senate; my goodness), I feel like there will be more to say on the Midwest in the 2016 elections.

The ultimate takeaway I would want folks to have as they analyze this election and the (political) history of the Midwest is to remember that these counties were not always red. There existed, at a very different time but in the same place, rural Democrats across the Upper Midwest whose votes, voices, and elected officials directed policy–and not just agricultural–at the national level. Don’t believe me? Look at 1980. Or 1984. Or 1988. See a trend in the rural Midwest?

We can argue about where they went (and once the political scientists are done, historians will join in) and why, but that doesn’t change the fact that they were there. This election makes history, but it shouldn’t change the way I approach mine.

*I’d like to take this moment, while I try to stay off my own political views, to express my profound disappointment that my home district, Minnesota’s Second, will be represented by the absolute blowhard of a candidate, Jason Lewis. John Kline did many good things for the Second. I do not know what kind of representative Angie Craig would have been, but I have so, so many doubts that Lewis will do a fraction of what Kline did.

Not the first time a media personality’s won in the Minnesota suburbs, though, am I rig–oh no I think Inver Grove Heights just had to close another school due to budget cuts.

**I look forward to this being the subject of a 20-minute discussion at the next MHA on why we need to have a “Great Plains” and a “Midwest” (and probably a “Corn Belt” and “Rust Belt” and “Water Belt” and “Reversible Belt”) understanding of the region, too.